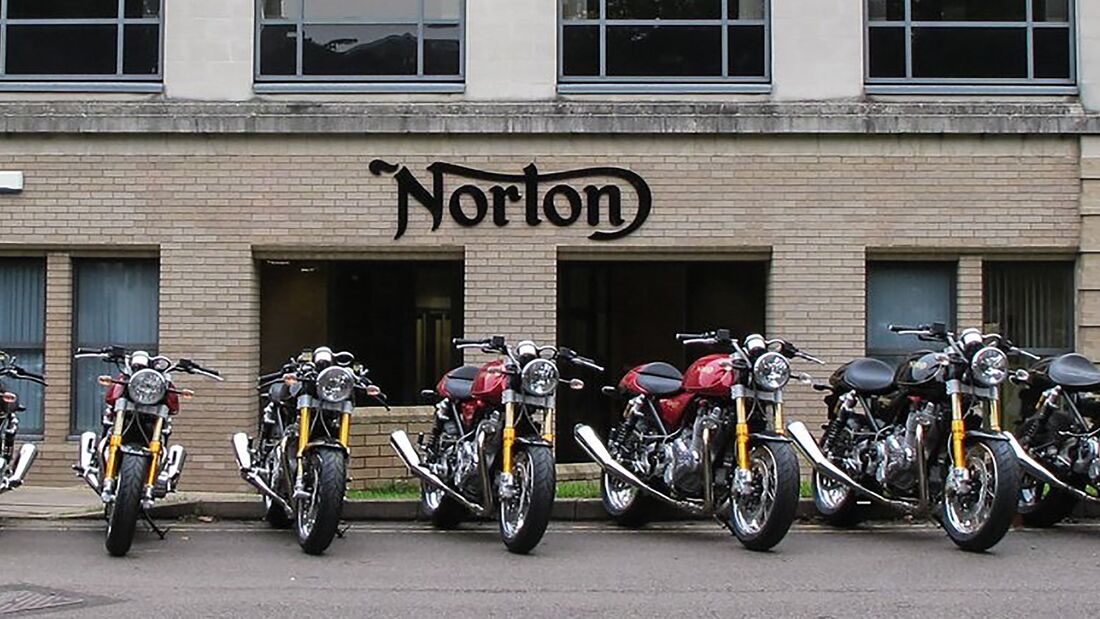 The takeover of Norton by TVS has been confirmed by both the insolvency administrator BDO and TVS. The purchase price was given at 16 million pounds (the equivalent of 18.4 million euros). TVS wants to keep the Norton Donington location and also take over the workforce. The Indians did not take over the properties of Norton with the purchase price. One is there for rent and will look around for a new location in the vicinity at short notice. The Indians are also planning to continue production of the current series. In addition, they want to finally go into series production with the new models for the new 650 twin-cylinder. With the international distribution network of TVS Norton will also get access to new markets. The Indians will not settle the Norton debts from the pension funds. These are to be covered from the sale of the various Norton buildings. Commenting on the acquisition of Norton, Sudarshan Venu, Managing Director of TVS Motor Company, said: “This is a meaningful time for us at TVS Motor Company. Norton is a globally recognized UK brand and offers us an immense opportunity. This transaction is consistent with our efforts to meet the aspirations of demanding motorcycle customers. We will fully support Norton to regain its full glory in the international motorcycle landscape. “

TVS has appointed John Russell, who was previously both Vice President and General Manager of Harley-Davidson Europe and, prior to that, Land Rover, as Temporary General Manager. So Russell knows the industry. It should now be up to him to set the course for the Norton future under TVS and to ensure that the Norton brand can regain trust.

The new owners and the CEO do not waste any time: Norton recently posted 15 vacancies. We are looking for employees in a range of technical and administrative positions, including quality manager, senior designer and senior drive technician. “We have started planning for the restart of the company and we want to fill some existing positions as well as expand the company’s capabilities,” said John Russell, Interim CEO of Norton, to his British colleagues at MCN. The hiring of 15 employees increases the current workforce of 55 employees by more than 25 percent. And it sounds like one or the other job advertisement will follow:

The positions that we are recruiting for include the entire organization, technology, operations, sales, marketing and service. Initially, we want to fill around 15 positions and there will be further recruitment rounds perform when Norton has reached its full potential.

The TVS Motor Company is part of the TVS Group, which has annual sales of around $ 8.5 billion and bundles around 90 companies under one roof. The Indians look back on 100 years of company history and are present in 60 markets worldwide. TVS also produces the G 310 R and G 310 GS models for BMW. TVS is also one of the largest Indian automotive suppliers.

In early January 2020, Norton had hit the headlines and troubled over a tax liability of £ 300,000. Norton ex-Boss Stuart Garner had to answer questions from a British bankruptcy judge about how the motorcycle manufacturer imagines the reduction of tax debts. The original tax liability is said to have been as high as £ 600,000, but half has already been paid in the short term. The motorcycle manufacturer asked for a 63-day delay in payment and cited expected tax returns and subsidies of around £ 135,000. The responsible bankruptcy judge has initially postponed the matter until February 12, 2020. Then you wanted to continue negotiating.

At the end of January 2020, insolvency proceedings were opened at Norton Motorcycles due to insolvency. Obviously, the high investments for the upcoming series production for the new two-cylinder as well as the V4 models forced the small series manufacturer financially to its knees. It was only at the end of 2019 that Norton had raised money for the upcoming production of the new models via crowdfunding. An unnamed major investor then provided capital of one million pounds. However, this investment does not seem to be sufficient to implement the production plans. The production facilities for the two-cylinder are still a construction site, as is the supply chain for a possible production.

Since February, the motorcycle manufacturer has been under administrative administration by the auditing company BDO. Norton currently has around 100 employees. According to the insolvency administrator BDO, there were a total of 331 expressions of interest from various sides to want to take over the ailing motorcycle manufacturer. Only a few of them wanted to be examined more intensively and, if necessary, negotiations started. Potential buyers could contact BDO up to March 25, 2020. Ex-Norton director Steve Murray is said to have been among those interested in a takeover of Norton. Murray is likely to lose around 1.5 million euros that he has invested in the motorcycle manufacturer if the company is wound up. The Indian two-wheeler manufacturer TVS was also traded as a buyer in advance.

In 2012, four years after Stuart Garner took over Norton from American businessman Kenny Dreer, Norton was on the verge of bankruptcy. Two other Stuart Garner companies are currently in insolvency proceedings.

In addition, the British media reported that they were involved in a pension scandal. Norton ex-Boss Garner is said to have set up three pension funds through an external company and collected millions of euros, all of which flowed into the motorcycle manufacturer and were not invested long-term and securely as agreed. A sum of 14 million pounds is rumored, which was fraudulently embezzled. In the meantime, a pension fund victim has launched an online petition calling on the British government to question Norton ex-Boss Stuart Garner about the incidents and also to compensate for the pension shortfalls.

In addition, the British government is said to have received funding of around six million euros over the years for Norton Motorcycles and the British Motorcycle Manufacturing Academy, which is also controlled by Garner. In addition, the insolvency administrator BDO reports on creditor claims amounting to around 950,000 euros, which flowed into the company as customer down payments for motorcycles that were never delivered. Since the second week of February, production at Norton has also been closed. The employees are still paid, however.

Total debt is over 30 million euros
As the British Superbike magazine now claims to have calculated with an insight into the files of insolvency administrator BDO, the liabilities of all Norton activities are over 28 million pounds (the equivalent of around 31.5 million euros). Around 6.3 million pounds of this weighs on the motorcycle manufacturer. This contrasts with a capital of 300,000 pounds (336,000 euros) at the time of bankruptcy.